A Lauderdale County grand jury says the county courthouse stinks and needs to be renovated.

The jury's latest report, issued Thursday, is pretty much identical to reports about the building dating back at least a decade. An earlier report labeled the courthouse "deplorable."

Lauderdale County Board of Supervisors President Josh Todd, who represents District 3, said the report hardly surprised him or other board members.

"We're fully aware of all the shortcomings the courthouse has. We're in talks right now to find a suitable fix for the problem for the courthouse, county court, justice court and annex," Todd said. "We know the courthouse is insufficient. We're going to do what we can to fix the problem, whether it's to relocate or stay where we are."

Last May, supervisors hired noted Eupora architect Belinda Stewart to develop a plan on whether to renovate the cramped structure or build elsewhere. She recently delivered the final draft in a 66-page study, which cost the county about $75,000.

The top five options range in price from $30 million to more than $46 million. The old Village Fair Mall site appears to be a favorite of supervisors. Other courthouse site possibilities include the upper floors of the federal building and the Lamar Annex. 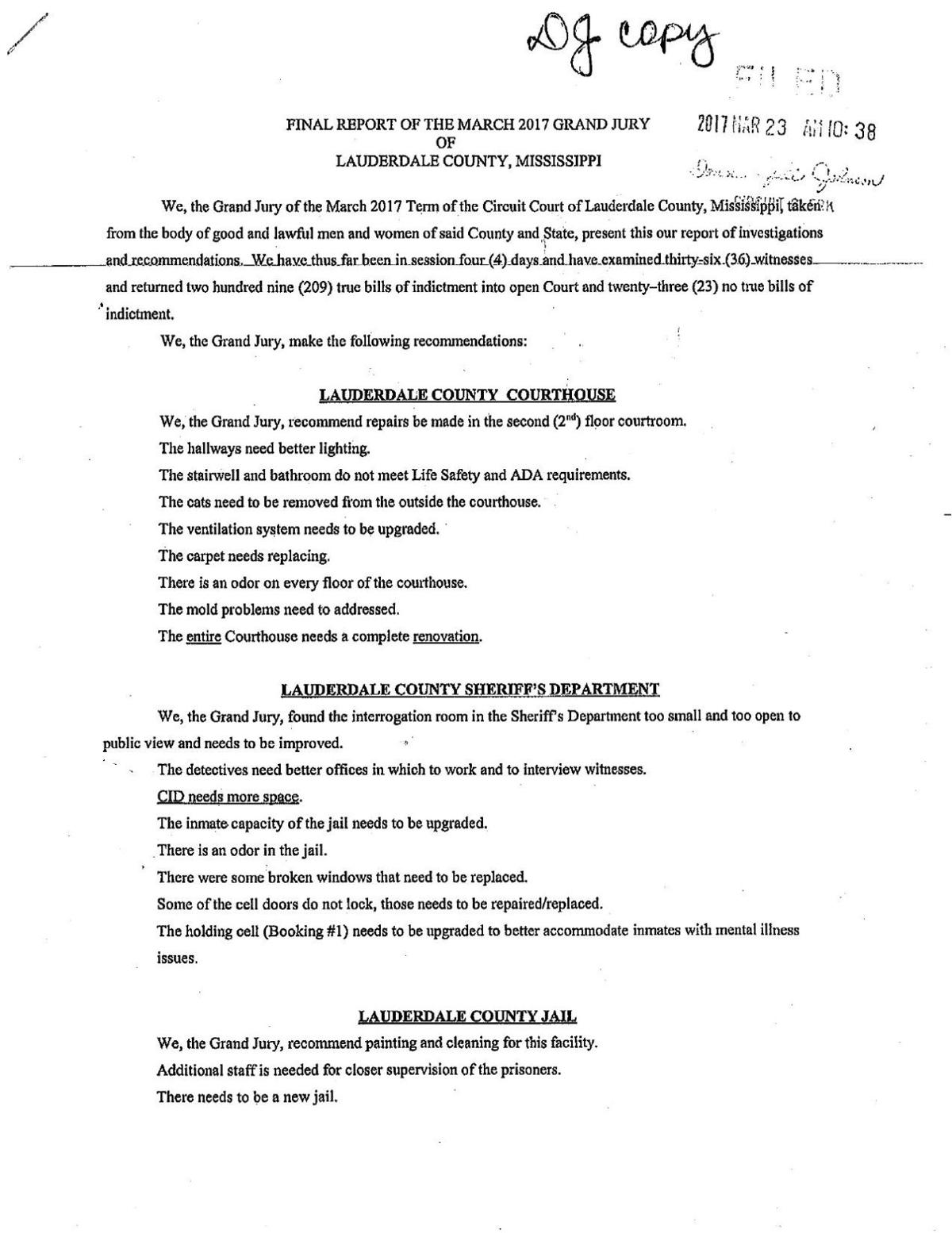 The latest report said the entire courthouse needs to be completely renovated. Other recommendations included improved lighting in hallways, stairwells and bathrooms needed to meet Life Safety and ADA requirements, upgraded ventilation system, replacing the carpet, addressing the mold problem, eliminating odors on all three floors and getting rid of cats that live outside the building.

Regarding the sheriff's department, the grand jury recommended larger office space for detectives to interview witnesses and work, more space for the Criminal Investigation Department, eliminate an odor in the jail, replacement of broken windows, repairing of some of the cell locks on doors and upgrade of the holding cell.

The report also said a new jail is needed. It also recommended additional staff is necessary so as to better supervise inmates. It also said the staff needed a pay raise the facility needed painting and cleaning.

"We've got problems in Lauderdale County and the Lauderdale County Board of Supervisors knows it," Todd said. "We're further along than we have been in a long time. This is a big problem. It's a big decision, a very large decision we've got. This is not something we're taking lightly. Hopefully the outcome will be the best outcome for Lauderdale County."

Paint peeling from the walls.

Despite funding arguments, the West Lauderdale Youth Association will receive $1 million from the Lauderdale County Board of Supervisors $14 …