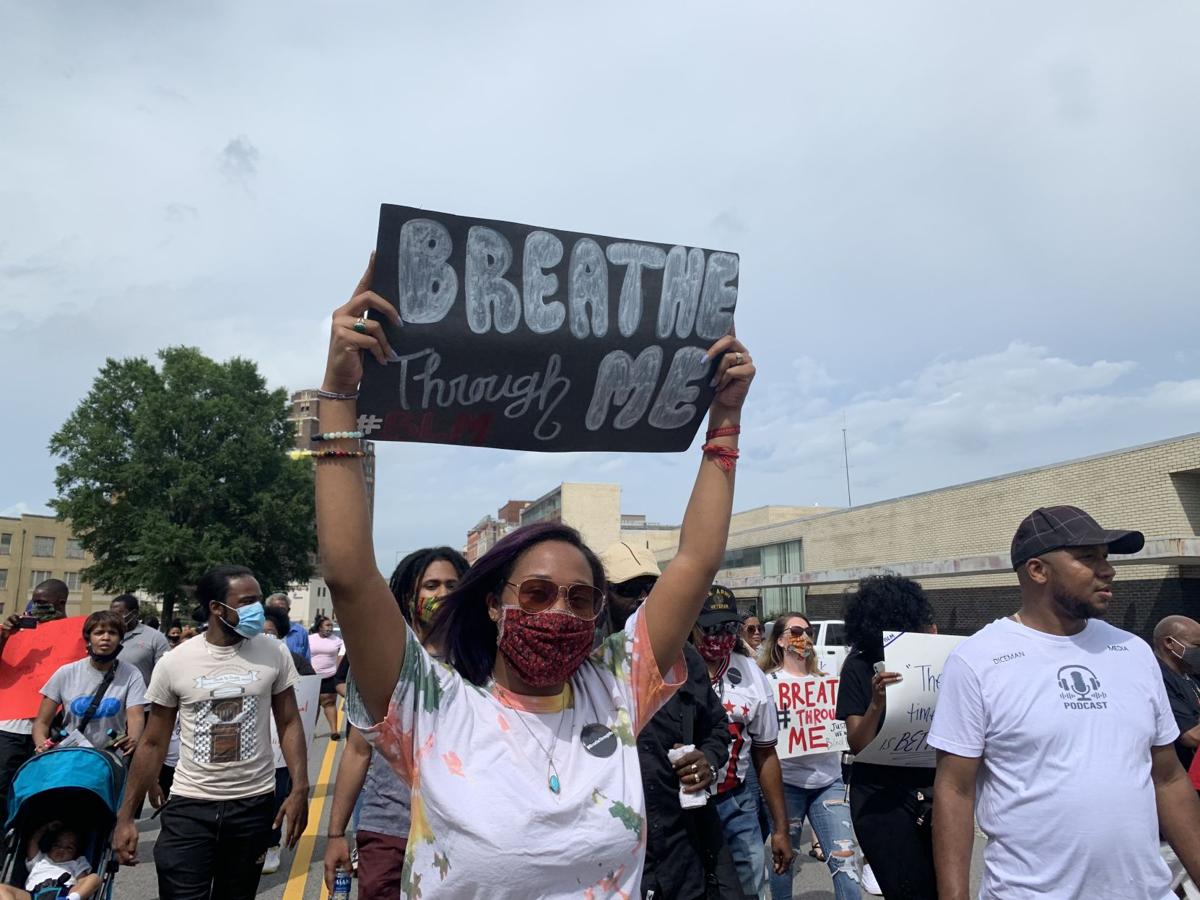 Sakarra Dancy of Meridian marches in a peace rally through downtown Meridian Saturday. 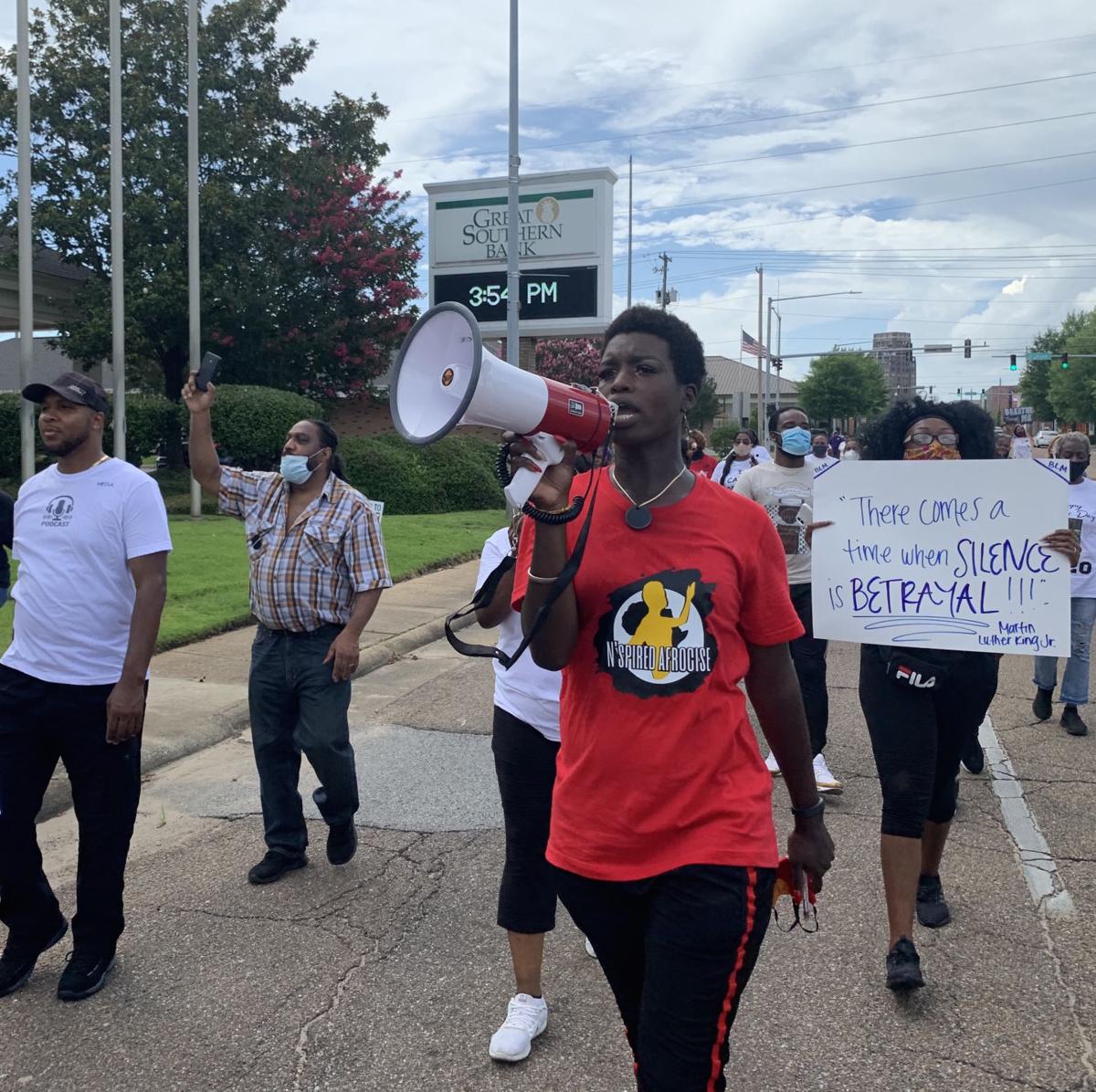 N'spire Walker, lead organizer of the third "Breathe Through Me" peace rally, leads walkers down 22nd Avenue to the Meridian Police Department.

Dozens of people marched from Meridian City Hall to the police department Saturday afternoon in the third “Breathe Through Me” peace rally, calling for an end to injustice and inequality.

A police car accompanied the group over the 22nd Avenue bridge as the group chanted, “Stronger, together, we’re going to be all right. Justice and peace is our divine right.”

Lead organizer N’spire Walker said the rally was meant to call for change, building off of the last two events.

The first rally was in response to the May 25 death of George Floyd.

A Minneapolis police officer who could be seen on video with his knee on Floyd’s neck for several minutes has been charged with murder.

Following the second rally, Walker addressed the city council and called for the removal of the Lauderdale County Confederate monument.

A petition to remove the monument was passed among the crowd Saturday.

Sakarra Darcy of Meridian marched holding a sign that read, “Breathe Through Me.”

“We need to make history and those types of history can be in museums, everywhere else, but we just need to put a positive light for the future,” Darcy said, referring to the monument.

The monument is on public property owned and maintained by the county, according to Lauderdale County Administrator Chris Lafferty.

The Board of Supervisors is the public body responsible for maintaining it, Lafferty said.

He said earlier this month that any position that the board takes will be in light of a state statute, Miss. Code Ann. 55-15-81.

The statute prohibits the alteration of historical monuments and memorials erected on public property.

“The governing body may move the memorial to a more suitable location if it is determined that the location is more appropriate to displaying the monument,” according to the statute.

Before the march, Walker called on participants to text legislators asking them to support changing the Mississippi state flag, which includes the Confederate battle emblem.

The House and Senate voted Saturday by more than the required two-thirds majority to suspend legislative deadlines and file a bill to change the flag, the Associated Press reported.

During Saturday’s rally, some also raised concerns about the March 27 arrest of Levi Gibbs by Meridian Police Department.

Council Vice President Weston Lindemann of Ward 5 announced Thursday that he is pursuing an investigation after reviewing dash cam video of the arrest.

In a letter that Lindemann said was written by Gibbs, Gibbs claimed officers punched him, and kicked him repeatedly after telling him he was stopped for speeding.

The city said it does not believe there was any evidence of police brutality during the arrest.

"The City has fully cooperated in the matter and stands by their position that information provided rebuts any of the claims made by Mr. Gibbs," Chief Administrative Officer Eddie Kelly said in a statement Friday. "The City also believes that the Meridian Police Department acted professionally during this incident and stands by those individuals who are sworn to protect the citizens of Meridian."

Walker said she still has questions about the arrest.

“We need to have a thorough investigation,” Walker said.

City of Meridian: Videos show no evidence of police brutality in March 27 arrest