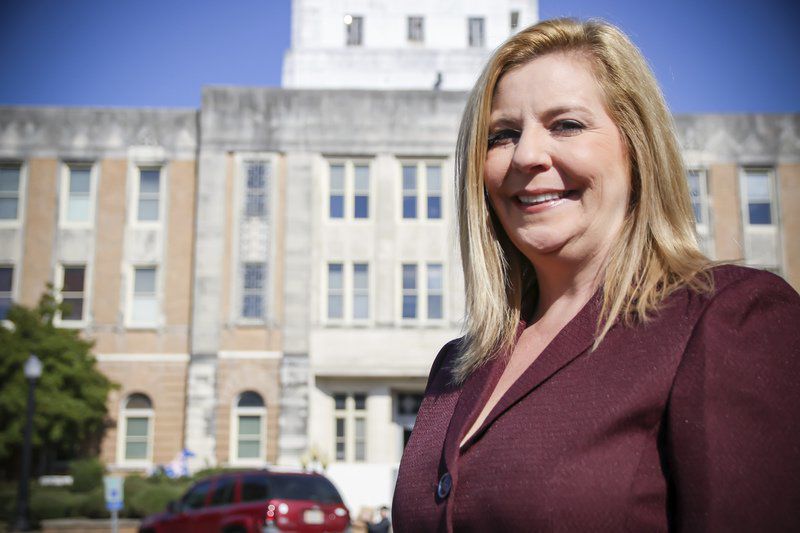 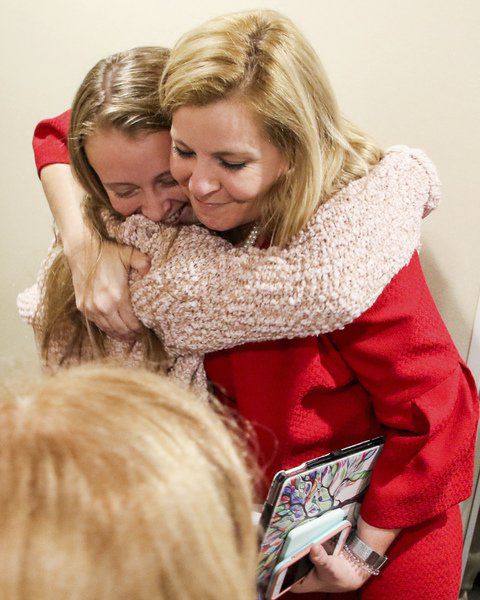 Savannah Davis, left, gives Kassie Coleman a hug for luck as they await the outcome of the DA election Tuesday night.

“I'm very thankful for the voters that turned out and trusted me to continue to serve,” she said. “I want both my supporters and the supporters of my opponent to know that I am going to be district attorney for all people.”

Tallies weren’t completed until close to 3 a.m. Wednesday due to a delay in tabulating votes in Kemper County. An absentee vote counter failed, according to the Kemper County Circuit Clerk’s office. A new counter had to be brought in from Columbus.

Coleman said she would continue to fight for the safety of all families, have an open-door policy and try to move cases in a more timely fashion.

“We’re also going to try to focus on our pre-trial intervention and our drug court programs for the people that have addiction issues,” she said.

Coleman held a 600 vote lead, with fewer than 180 affidavit ballots still left to be counted Wednesday afternoon, according to the circuit clerk offices in the four counties.

Counties have 10 days to send certified election results to the Mississippi Secretary of State's Office, according to Anna Moak, the interim communications director.

Several attempts to reach Grace for comment were unsuccessful.

In an interview last month, Grace, who owns a law practice in Quitman, said that he wanted to change the status quo and create a safer district.

Many of his supporters are advocates for the family of Christian Andreacchio, whose case was the subject of a popular podcast this year.

Police ruled the 21-year-old's 2014 death a suicide, but his mother has said the family has reason to believe he was killed.

In 2017, a Lauderdale County grand jury declined to indict two people in connection with his death.

Grace said on the podcast that the case should be reopened and that there was enough evidence to move forward to a new grand jury.

“I still believe that the ethical boundaries of what is required of any prosecutor in the situation is that new or additional information is required and is necessary to resubmit the case to the grand jury,” Coleman said Wednesday.

She said the Andreacchio case played a role in the election results.

“I would have to say that either the case or maybe people that felt like they identified with the family’s journey or struggles with the criminal justice system played a huge part,” she said.

Grace carried Lauderdale County with 10,336 votes to Coleman's 10,263 and was the only Democrat in a contested race in the county to receive the most votes.

The Meridian City Council passed a resolution Tuesday requesting the U.S. Department of Justice open an investigation into the case.

“If the Department of Justice or the city of Meridian wants to further investigate and bring additional information, then we’re always willing to review and if we find it to be credible, to resubmit it,” Coleman said.

Unofficial vote totals for the four counties were:

Coleman holds 600 vote lead over Grace; thanks voters for victory in DA's race

An earlier version of this report did not include absentee ballots from Clarke County.

Arrangements were incomplete at Berry and Gardner Funeral Home for Mrs. Shirley Harris, 69, of Meridian, who died Tuesday, March 31, 2020 at Rush Foundation Hospital.

In keeping with the wishes of Mr. Hall and his family, there will be no services. Final arrangements have been entrusted to Berry and Gardner. Mr. Hall, 57, died March 31, 2020, at Rush Foundation Hospital.

Arrangements were incomplete at Berry and Gardner Funeral Home for Mr. George Alexander, 52, of Meridian, who died Sunday, March 29, 2020 in Meridian.