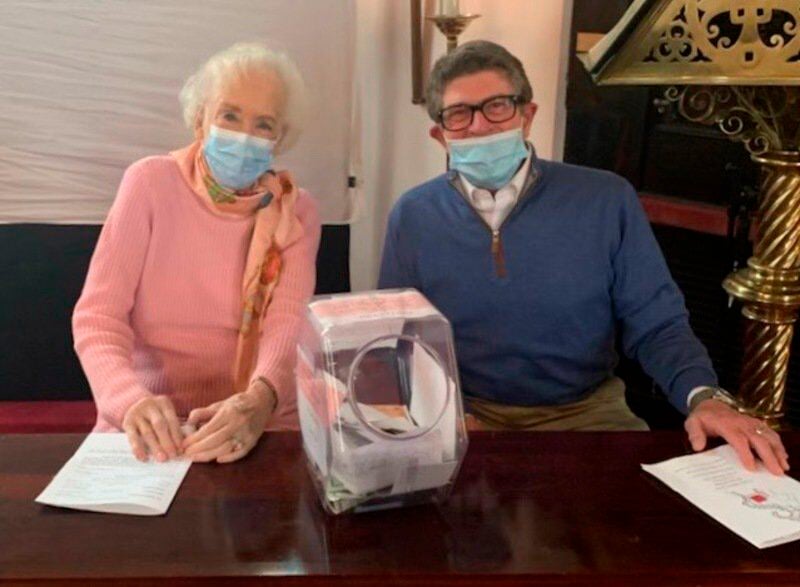 Beryl Webb and Bill Barham, who usually greet guests at the Kentucky Ham Meal, sat in the front of First Christian Church collecting donations as the congregation exited the sanctuary on Sunday. 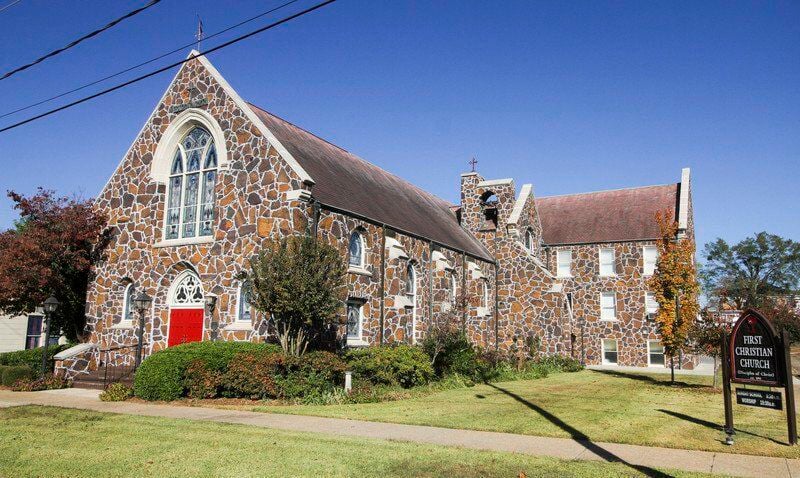 First Christian Church at the corner of 13th Street and 23rd Avenue.

Due to the COVID-19 pandemic, The Kentucky Ham Meal at First Christian Church has been cancelled this year for the first time since it started in 1963.

Church leaders regretfully made the decision last month, believing it to be the safest course of action.

“The congregation has overcome a lot of obstacles facing the Kentucky Ham Meal such as tornadoes, sink holes, and building projects that interfered,” said the Rev. Mark Benson, pastor of First Christian. “But never before had we been faced with a pandemic. We considered a postponement, but the more we discussed, the more we concluded that cancellation was the best option.”

The congregation has still found ways to support the 11 benefitting charities, the majority of which are local, such as Care Lodge and the Boys & Girls Club.

Beginning with Kentucky Ham Sunday, which is always the first Sunday of February, the congregation has been receiving offerings from its membership and anyone in the community who would like to contribute to the mission effort.

The members wore Kentucky Ham Meal T-shirts from the past, and Rev. Benson even delivered his sermon wearing a ham meal T-shirt.

Bill Barham and Beryl Webb, who usually greet guests who attend the Kentucky Ham Meal, sat in the front of the church collecting donations as the congregation exited the sanctuary. Of course the Ham Meal is a collaborative success from the congregation at First Christian as well as our community.

“We are going to raise money during the month of February, so that we can make awards to the various organizations in March,” said Mary Gilmore, member of First Christian and chair of the Kentucky Ham Meal. “We have had many wonderful individuals and businesses support us over the years. We would welcome any contribution they wish to make, but mostly we are simply looking forward to seeing them back in 2022.”

If anyone would like to make a donation to this worthy cause, please send donations to FCC, Kentucky Ham Meal, PO Box 691, Meridian, MS 39302.

The Kentucky Ham Meal is an annual project by the Disciple Women Fellowship at First Christian. The meals take place in early February over a two-day period, where nearly three thousand guests are served indoors or through takeout. The menu consists of Kentucky Ham, grits, red eye gravy, scrambled eggs, and homemade biscuits. The next  meal is scheduled for Feb. 8 and 9, 2022.

First Christian Church is a congregation of the Christian Church (Disciples of Christ), a mainline Protestant denomination founded in the early 1800s. The church is located at 1301 23rd Avenue in Meridian.

The tradition of the meal began in 1963 as a call for help. An appeal went went out to the Christian Churches (Disciples of Christ) to help in modernizing Jackman Memorial Hospital in Bilaspur, India.  Wanting to respond to the need, FCC of Meridian's Christian Women's Fellowship decided to sponsor a fundraiser. At the suggestion of Dr. and Mrs. Apperson, who had come to the Meridian church the previous year, the first Kentucky Ham Breakfast was organized.

The Appersons traveled to Kentucky and purchased 60 pounds of Kentucky cured hams and brought them back in the trunk of their car for the first breakfast. Almost $600 was raised for an offering sent to the Jackman Hospital that year.

Fifty-eight years later the amount of ham purchased has increased to more than 800 pounds. Almost 3,000 supporters are now being served and serving times has increased to two days, and it is now called the Kentucky Ham Meal. Men and youth as well as friends outside of FCC also lend a hand in what has evolved into a community wide event.