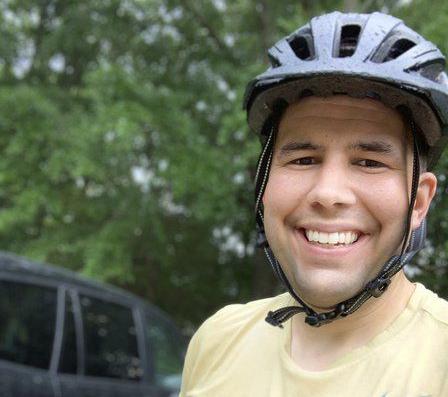 Rev. Nick Adam will cycle the length of the Natchez Trace Parkway beginning on Sunday, after the 11 a.m. Mass at St. James in Tupelo for the first ever "Tour de Priest." 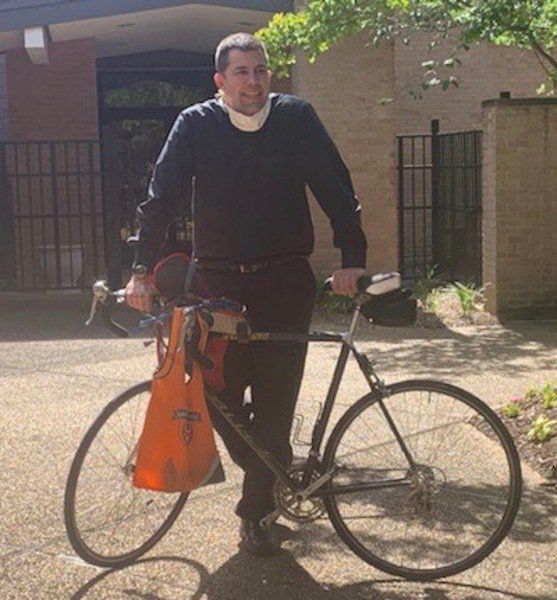 Rev. Nick Adam will cycle the length of the Natchez Trace Parkway beginning on Sunday, after the 11 a.m. Mass at St. James in Tupelo for the first ever "Tour de Priest."

Rev. Nick Adam, a former sportscaster with WTOK in Meridian who is now a Catholic priest, will cycle from Tupelo to Natchez for the first ever “Tour de Priest.”

Adam recently became vocation director for the Catholic Diocese of Jackson, which means he recruits young men who are interested in becoming priests themselves and young women who feel called to be Catholic sisters.

To build awareness for his mission and to raise money for it, Adam will ride a bicycle through Mississippi on the Natchez Trace Parkway, beginning on Sunday, after the 11 a.m. Mass at St. James in Tupelo.

“I just took over as full time director of vocations for the Diocese of Jackson on July 1, and this event is a way to build excitement and awareness for my mission,” Adam said. “I want to build a culture of vocations in our diocese, which stretches from the northern border of the state all the way down to Highway 98. We have been served by priests and sisters from many different parts of the country and the world, and now is the time to honor their service by cultivating “homegrown” vocations.

“I also hope that this ride is a fun way to build traffic on our recently developed social media platforms and website (@jacksonpriests and www.jacksonpriests.com), and that it attracts eyeballs that could belong to someone who may be quietly considering God’s will in his or her life.”

Adam said the ride is in support of the first “Homegrown Harvest” Gala, which is scheduled in October.

“My vision for the gala is to celebrate all the young men and women who are open to the call and their families, but since we recently decided to move that event to a virtual one I thought that this ride would be another way for folks to connect with our department,” Adam said.

“All money raised will go specifically to seminarian education," Adam said. "Men who are studying for the priesthood receive at minimum a bachelor's degree in philosophy and a master's of divinity, so we are looking to build up our largest trust so that tuition and fees can be offset each year and we can support our mission now and in the future.”

He said he chose the Natchez Trace because it connects many communities and for its beauty.

“It is like a postcard from the Lord saying, look at the creation that I have set aside for you, why are you worried about so many things, just follow me," Adam said.

“The shelter-in-place opened up evenings for me and so I began really riding my old road bike in earnest then, and then I just thought, we need something positive, we need something uplifting, we need to see something that isn’t bad news, what if I just do a crazy bike ride that people can follow and learn about all the awesome things that God is doing in our diocese?”

Adam will be posting stories on Facebook and Instagram, featuring seminarians who are staying at parishes along the Trace, with stops in Starkville, Kosciusko, Jackson, the Grand Gulf Military Park and Natchez.

“Now, not all of these locations have seminarians residing there for the summer, but they all have stories to tell,” Adam said. “I heard that Bishop William Henry Elder, who served our diocese during the Civil War, dedicated a church near Grand Gulf which still stands, so I want to share our history with Catholics in Mississippi. We have been here as a diocese for more than 180 years, so there is a lot to learn!

“I am hoping that this spur of the moment thing catches on and becomes a bigger event down the road. Maybe I’ll move it to the fall next year – I certainly picked the hottest time of year to ride 300 plus miles!”

Adam said, If this year has taught us anything, it is that we are not in control of our lives as much as we think we are.

• To contact Rev. Nick Adam, director of vocations for the Diocese of Jackson, call 601-366-2335 or email frnick@saintrichard.com.

• If you would like to donate to seminarian education, you can download the “Givelify” app to your smart phone, then search “Catholic Diocese of Jackson,” select the amount you wish to give, and then click on “Tour de Priest."

“Jesus’ example in the Gospel shows us that the most important thing is doing the will of God, this led him to the cross, and to the resurrection. We are only truly free when we seek freedom from sin and we look toward the Lord’s will for us.

“God is calling young men and women to radically serve him, and when they say ‘yes,’ they find a freedom that the world cannot give. Priests and nuns follow the call from Christ to celibacy for the sake of the kingdom (cf. Matthew 19:12). They give up marriage and family not because marriage and family is not amazing, but because they are called by the Lord to be witnesses to the reality that our greatest relationship is with our Lord, and heaven is what we should be living for.”

Adam said for those who feel they may be called to this life, it is important that they share this with someone who can help.

“Many people think, ‘oh, I can’t go to the seminary or even tell a priest that I’m interested because then I’m committed,” Adam said. “This is not the case, my job is to walk with young men who are open to God’s call to priesthood and with young women who are considering vowed religious life.

“The Church discerns alongside the person, and we have structures in place to give men and women the time, space and resources to truly discern that call. You would never marry someone you haven’t dated, well, it’s similar with priests and nuns, you need time to speak with the Lord in freedom and consider His call before making an eternal commitment.”