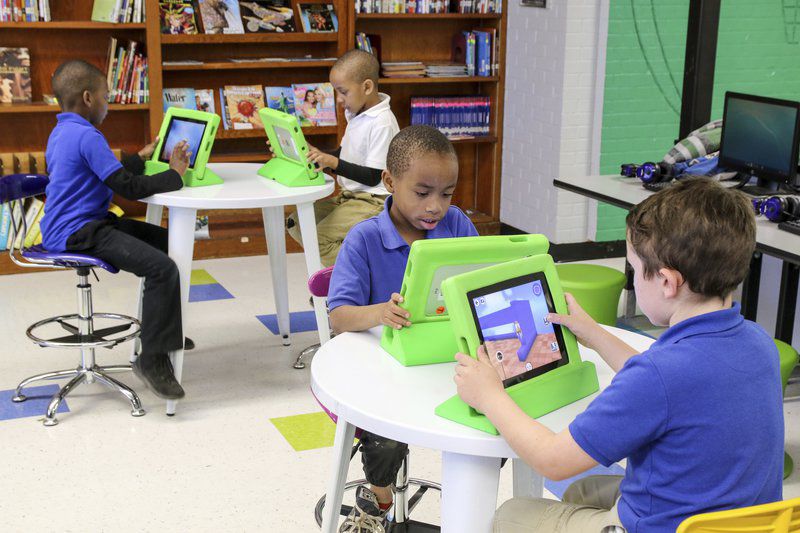 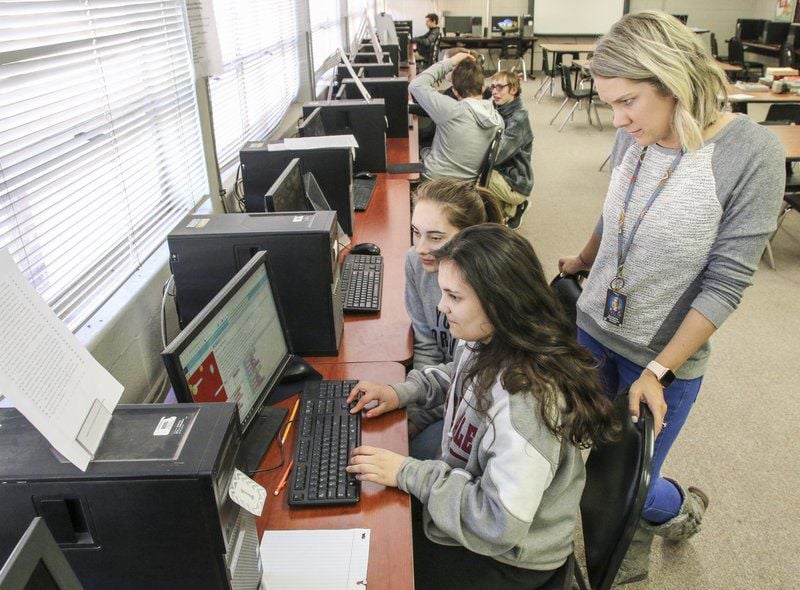 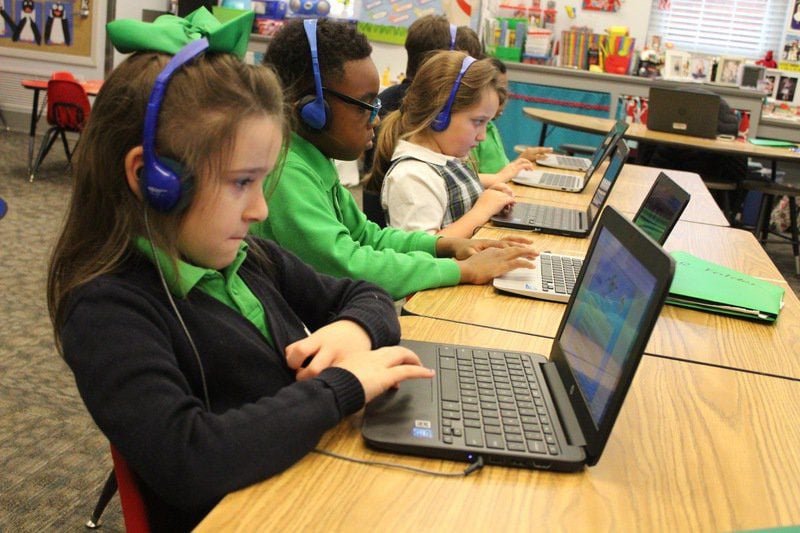 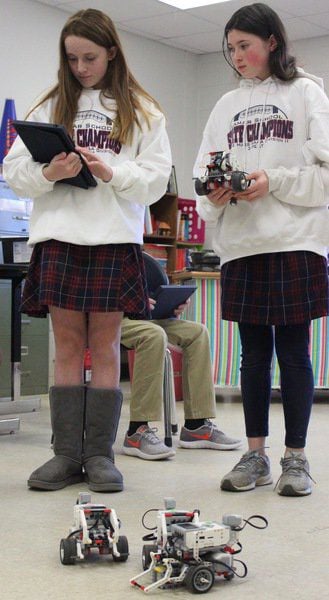 Whether it’s through apps, smartboards, Chromebooks, or digital textbooks, schools in Meridian and Lauderdale County are finding different ways of using technology to help students achieve.

Over the last three years, the Meridian Public School District has made an effort to give students one-to-one access to technology.

Part of that goal is to get Chromebooks for all third to 12th grade students, said Tim Boutwell, director of the district’s technology department.

“We finally met that goal this year,” Boutwell said, noting that Chromebooks were chosen because they are flexible and can be personalized to each student.

Boutwell said the library at Oakland Heights Elementary School is the perfect example of how the district uses technology to help students learn.

Besides books, the library has stations where students can use Ipads and smartboards individually.

Oakland Heights librarian Cindy Duke has also set up a space where students are exposed to math, science, computer coding, robots and engineering. Students as young as first grade are even learning how to program robots.

“I just wanted to expose the kids to the different things they can do,” Duke said.

In Janice Turnage’s third-grade math class, students interact through a platform called Kahoot!, where they compete against each other using a point system.

Turnage’s students also use Google Classroom to follow along and keep up with their assignments She said her students come to class with positive attitudes, because they enjoy interacting with technology.

“They absolutely love it,” Turnage said.

The district has also expanded its use of interactive smartboards by installing about 70 boards in different classrooms. Teachers use two kinds of smartboards, the typical type with a projector and a new kind with an interactive panel similar to an iPad. Most of the boards are used in math and science classrooms.

Teachers also use computers to help students prepare for standardized tests Students get a chance to use technology before the testing so they can become familiar with the testing environment.

Looking ahead, Boutwell said the district hopes to expand students’ access to computer coding classes beyond the career and technical program. He would like to see the use of technology grow across the school system.

“We are doing a great service for the community by providing these devices,” Boutwell said.

"We try to expose students to all kinds of technology," said Trent Airhart, IT supervisor for the district. "We need to be looking at the 22nd century.”

At Clarkdale Middle School, students in Katie Moffett’s eighth-grade cyber foundations II class create video games by using coding such as JavaScript. Such activities help students explore their interests, Moffett said, adding that many didn't realize that a video game development can be a career.

The district also uses social media to communicate with parents and the community through the P3 app and Twitter.

With Andrea Williams recently hired as the district's communications coordinator, its social media presence is growing, Airhart said. Since Williams came on board, the district has also created a YouTube channel.

The district also launched a digital flyer called Peach Jar. Instead of sending paper copies to parents, they can find the information online, which also saves on the cost of printing paper copies.

A few months ago, the district received a grant to offer distance learning carts at each school except the Northeast schools, which are located in the city limits of Meridian and weren’t covered by the grant.

The district is also part of a pilot program called CS4MS Initiative, which offers computer science in grades seven through nine. Through the program, advanced placement computer science is also being offered at West Lauderdale High School.

At St. Patrick Catholic School, a private pre-K3 through sixth grade school in Meridian, the focus is on students having one-to-one access to technology in the classroom.

“We use technology in all of our classes as a form of engagement,” said Montse Frias, the school’s principal.

One example of how teachers use technology is when students are learning about geography. Instead of students looking on a paper map for a certain country, teachers use Google Maps, which allows students to find and actually see the country.

The school also teaches students how to analyze what they see online. Frias said it is important for students to form their own opinion about what they read on websites.

“Not everything you see online is true,” Frias said.

Technology also helps keep the school safe, Frias said. Doors are locked at all times and the only way to open them is by using a card reader.

At Lamar School, a private preK-12 school in Meridian, MacBooks were first offered to seniors about six years ago.

Once students were provided with the technology, teachers received training on how to use the Mac Books, according to Headmaster Leigh Ann Ballou.

Ballou said the technology, which is paid for through tuition and fees, is improving how Lamar students learn.

“We saw a lot of just student engagement through the use of MacBooks we have never seen before,” Ballou said.

Students also have the option of accessing textbooks online as well as having a hard copy. Ballou said younger students are drawn to the online format of the textbooks.

“We see more and more as the younger generations coming in, they don’t want that hardback, but they will just go solely online,” Ballou said.

Ballou said having textbooks available online is helpful for athletes who travel for games. Instead of carrying a stack of books, they can take their MacBook along.

Senior Jake Emerson sees having a Mac Book as an advantage, because they are light and more accessible than textbooks.

“Everything is all in one place,” Emerson said. “It’s a lot easier in what we have to do.”

Ashley Brown, who teaches high school Spanish, uses a feature called Google Voice in her class. Students speak their responses into a computer instead of in front of the class, which allows Brown to check the verbal responses faster.

Brown said that in the past, assignments were only done through textbooks and translation. Using computers has made the class more interactive, she said.

Ballou said technology has also made grading papers easier, because teachers don’t have to take home a stack of papers to read.

The school also offers STEM (Science, Technology, Engineering, and Math) classes for third to seventh grade students. Outside the classroom, the school has a robotics team at the high school and middle school levels.

Teachers are not left out of the learning process, and are encouraged to attend professional development classes and conferences.

“Even as teachers we are still learning,” Brown said.