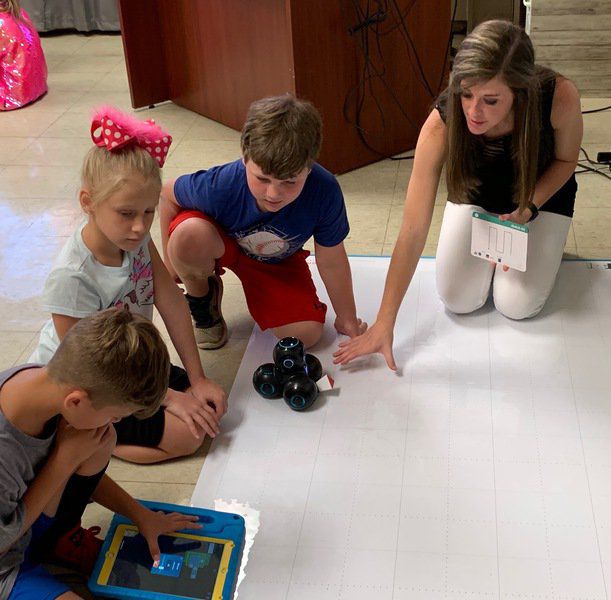 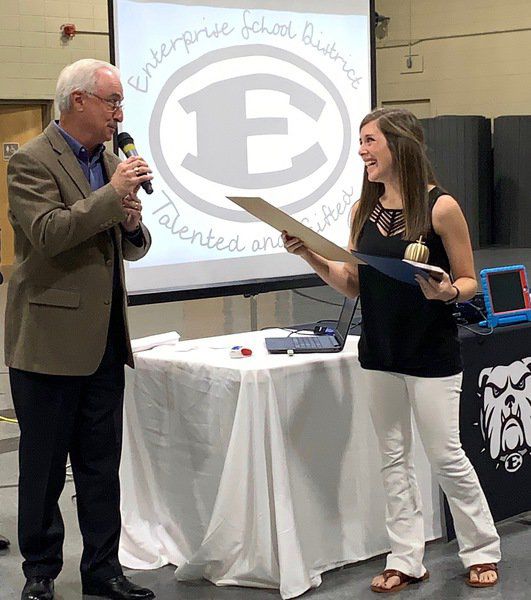 ENTERPRISE — Students who think outside of the box keep September’s Golden Apple Award winner “on her toes.”

Enterprise Elementary School teacher Amber Goodman knows from childhood the challenges of being intellectually gifted – so when she decided to get her Master’s Degree in Gifted Education from Arkansas State University in 2018 she said it was one of those things she just felt led to do.

“It’s funny how it worked out,” Goodman said. “I decided to get my degree in gifted in the middle of the school year, like in January, and if I hadn’t started then, I wouldn’t have been done in time to get this gifted education spot.

For her dedication to her students, Goodman was recognized as the Golden Apple teacher for September during an assembly at the school Tuesday.

The gifted and intervention teacher has been teaching for five years and is in her second year of teaching YES/Intervention at Enterprise Elementary. Principal Steven Gunn said when he first interviewed Goodman he knew she had a great deal of energy and excitement for teaching. She developed an interest in pursuing her master’s degree in the intellectually gifted area while still teaching first grade. Soon after she completed it we were in need of an additional gifted teacher, Gunn said.

“Along with teaching in our gifted program, she began her role as our first interventionist, and does this for part of the school day,” Gunn said. “The effect that she had as an interventionist was immediate.

“EES was suddenly able to work with students in a way we had not previously been able to do.”

Does being gifted necessarily mean academically gifted? No, a lot of times it is intellectually gifted – which means thinking outside of the box, Goodman said.

“They could have all A's and B’s and that’s great, but a lot of times it is intellectually gifted,” Goodman said. “They are a great problem solver, good at coding, and a lot of times that comes in with academics, too.

“We can usually tell if they are gifted if in class they start to act up a little bit because they are bored. When they come to gifted they get a chance to use those abilities of problem-solving, coding and thinking outside of the box. They have time to be a little more free in their learning instead of so structured – like is required of them.”

Goodman explained coding as about being the brain of a program because a program can not do it itself.

“For example a robot – everybody thinks a robot is going to take over the world, but that’s impossible because a robot does not have a brain,” Goodman said. “But, the person controlling the robot could be a good coder or a bad coder.

“We always want a coder to be a good coder that makes everything better, not a bad one. That’s another reason we explain good and bad choices.”

Asked what she would hope for students ito learn tto prepare for the future, Goodman said, “Definitely coding, because by the time they graduate coding is going to be everywhere – it’s multiplying every single year,” Goodman said. “Who knows the next coder of a special App might be in our classroom right now.

“By the time they graduate in several years the world will be so different, and be more into technology than it is now.”

Goodman said her favorite thing about teaching is the students.

“I have the privilege of doing car driver duty in the mornings, and when they get out of the car greeting me – it makes a fire go off in my heart,” Goodman said. “It gets me excited for the day, so when I get to the classroom I am ready for the day.

“The academics are fun, all the challenges are fun, but what sticks with me more than anything is the love for these kids, and the love they show for me. These kids keep us going every day.”

Third-graders Laken Robinson and Scarlett Hatcher both agree their teacher is super fun.

“She is really cool, and teaches us about robots, how to program, and code,” Robinson said. “She also lets us talk and that makes it fun.”

“I think it is so cool she won the Golden Apple because she is our teacher, and I am very proud of her,” Hatcher said. “She is fun and lets us have fun with robots.”

Goodman said she loves teaching the gifted because – they challenge her.

“A lot of time people think we know how to do all this technology stuff going into it, but sometimes we are learning just as much as they are learning,” Goodman said. “I love coming to work every day because they put a new passion inside my heart to teach. They love to come to the classroom.

“Last year we did a forensics crime scene unit on how to solve crimes. You would have thought that was the coolest thing since sliced bread. They would come in everyday eager to learn more. If you didn’t have a fire – that would light one, and keep you on your toes. That’s why I love it so much!”

Goodman received a Golden Apple Teacher of the Month Certificate, $300 cash award, and $1,000 continuing education voucher for MSU-Meridian, and $1,250 in school supplies.

The eight monthly winners will be invited to the Golden Apple Teacher of the Year banquet and that winner will receive a special award on stage (The Meridian Star article), a custom-made Teacher of the Year Trophy, $2,500 cash to be used at their discretion and a $2,500 scholarship to be awarded to a deserving student in the teacher’s name.

PHILADELPHIA — After graduating from college with a degree in business administration, Anne Fisackerly thought she was going to work as an ac…

PHILADELPHIA — After graduating from college with a degree in business administration, Anne Fisackerly thought she was going to work as an ac…

Bloom where you are planted.

When Ashley McClelland was a child, she'd sit in her bedroom and pretend she was a teacher, with her stuffed animals as her students.

While raising her three daughters, Vicki Adcock had teaching on her mind.

BUTLER, Ala. — As both a teacher and athletic trainer, Brandi Nix has the perfect job.